A trip to Sabratha (sometimes called Sabratah) brings one closer to the majestic past of Libya. A treasure trove of ancient relics, it is one of the foremost tourist attractions in the country.

The site is situated northwest of Libya. To get there from Tripoli, you have to travel 65 km (40 miles) west. Of Tripolis’ three cities, it is the westernmost. You can find it in the Zawia district.

The foremost attraction is a grand theater dating from the 3rd century. The three-storey architectural backdrop has been retained. Aside from this, numerous temples can be seen.

Some of the most renowned are the shrines for Isis, Serapis and Liber Pater. A testament to its myriad attractions is the presence of a Christian basilica. This was built around the reign of Justinian.

Visitors will also see ruins of mosaic flooring. These remnants are from the luxury houses in Roman North Africa. The finest examples are those at Villa Sileen close to Al-Khoms. Other colorful mosaics can be seen on the seaward pattern over the shore. 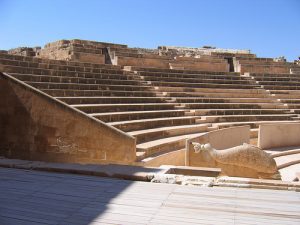 The theater’s black and white floors have also been preserved. Not far from the site is a museum. This is a repository of relics from the area. Many tourists who go on a trip to Sabratha do so to enjoy the lush Mediterranean greens.

During the 2nd and 3rd century AD, the area fell to the Romans. The site attained its peak during the reign of Severans, who was born nearby at Leptis Magna. A powerful earthquake in AD 365 destroyed the area. It was rebuilt the following year. Its importance dwindled during the Arab rule however.

A trip to Sabratha on your vehicle may require a 10 to 30 LYD insurance. The price may go up if you plan on staying for several days or weeks. The license plate costs 115 LYD, but it can be refunded when you leave Libya.