A trip to Saimaa Lake is one of the most popular activities in Finland. This is the biggest lake in the country and the fifth biggest on the European continent. 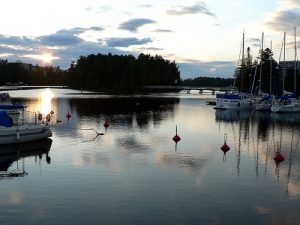 The lake is situated at the southeastern Finland.

The lake is known for the two freshwater seal species, the Saimaa and Ringed Seal. The Saimaa Ringed Seal belongs to the Ringed Seal subspecies. These are endangered species and can only be seen at this lake. One of the most popular activities on the site is cruising from Lappeenranta to Vyborg. This is done by way of a canal.

Using this canal, you can cruise the lake and go all the way to Russia. The reason for the popularity of this activity is the view, which is one of the most scenic in the country. This is one of the highlights when on a trip to Saimaa.

Through the years, several towns have appeared around the lake. These include Joensuu, Varkaus, Mikkeli and Savonlinna. They offer many services and amenities for the tourists.

The lake is about 1,700 sq mi or 4,400 square kilometers. The lake was formed by the glacial meltdown at the end of the Ice Age. Major parts of the lake are spotted with islands. The lake can be separated into several portions.

These have the names of the towns. There are thousands of islands in the region, over 14,000. Apart from the Saimaa Canal from Lappeenranta to Vyborg, there are other canals that link the lakes to the eastern portion of the country.

Together, they make up the waterways network. These waterways are utilized for transportation of cargo, pulp, metals and minerals.
The shores of the lake are the most likely source of asbestos-ceramic. This is a kind of pottery that is made with clay and asbestos.

The airfare costs around 1000 USD if flying in from the US. However, there are some cheaper airlines that offer tickets for 700 USD or less.

There are many cities around the lake, one of the best being Lappeenranta. One of the most popular attractions here is the fortress at the center of the city. This was created in the 17th century. The complex includes a church and some workshops.

If you are going on a trip to Saimaa, you can stay at any of the many hotels in Lappeenrant. There are also several cafes and bars like Majurska and Prinsessa Armaada.