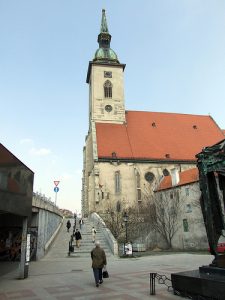 The St Martins Cathedral in Bratislava has three naves. It measures 69.37 m x 22.85 m x 16.02 m (L x W x H). The shape of the edifice is akin to a crucifix. The nave is symbolic of the body of Christ. The presbytery is symbolic of Christs inclined head.

At the altar, the equestrian statue group of St. Martin dominates the scene. The figure is clad as a Hungarian hussar does.

Even before the cathedral was built, the site was already a place of worship. It also used to be a market and a chapel. The Bratislava Castle was also a place of worship. A church was constructed there in 1221. It was done in the Romanesque manner. As the town grew, a new cathedral had to be built.

The construction was not completed until 1452. The delay was due to lack of funds and the advent of the Hussite Wars. Through the 15th and 16th centuries, construction of the cathedral continued. A presbytery was added in 1461-1497.

The church got its present look around 1869 to 1877. The church was redesigned, giving it a more Gothic appearance. For several years, the church would become the site for the coronation of kings and queens.

The entrance fee to the cathedral is 2 Euros.

If you are going to visit Slovakia, there are many travel packages to choose from. A 1000 USD package will give you the chance to see many attractions.

Right next to the cathedral is a monument. A synagogue used to be located there until the Communists brought it down.

At the head of the St Martin’s Cathedral in Bratislava tower is the Hungarian Crowns replica. This is set on a 4 meter stone pillow.