The continent of Africa is known throughout the world for its lush jungles and menagerie of animals. There is no better example of this than Salonga National Park which is located in the Democratic Republic of the Congo. 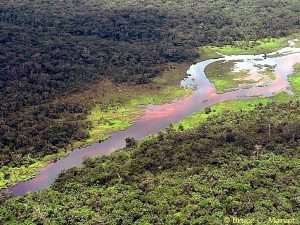 Africa’s largest tropical rainforest reserve, Salonga National Park is located at the very heart of the Congo River’s basin. To be precise, the park is situated in a large portion of the Zaire River’s central basin. Lying in the equatorial regions of Bandundu and Kasai, the park is in a very isolated area, which can mainly be accessed via boat.

Salonga National Park is identified with 3 landscape types, the low plateau, the river terraces and the high plateau, which are each associated with particular kinds of vegetation. There are large rivers situated west from the northern region which wind to a swampy embankment. There are deeper valleys on the higher ground located in the eastern sector, with rivers running below cliffs at an elevation of no less than 8 meters. The majority of the park is covered by equatorial forest, the main types of forest being riverine, swamp and dry land.

The park is home to a number of transitory or pioneer communities that live along the river banks. Thriving in its forests are various endangered species, the most significant of these being the Bonobo, also known as the pygmy chimpanzee or dwarf chimpanzee. Unfortunately, this species is not present in the northern sector, and there is some doubt if the animal even still exists in the southern region.

Other mammals that can be sighted in the park include the African golden cat, the Angolan mongoose, the bushbuck, the bush pig, the colobus monkeys, the Congo water civet, the forest elephant, the giant ground pangolin, the hippopotamus, the leopard, the long-tailed pangolin, the okapi, the sitatunga, the tree pangolin, the water chevrotain, and the yellow-backed duiker. The birds that can be spotted include the migrant black stork, the cattle egret, the yellow-billed stork, and the Zaire peacock. A notable reptile in the park is the African slender-snouted crocodile, also known as the “false” crocodile.

Salonga National Park was declared as a national park on November 30, 1970. It was then proclaimed by UNESCO as a World Heritage Site on October 1984.