The Saloum Delta National Park is one of the premiere tourist destinations in Senegal. The place is known mainly for its birds. 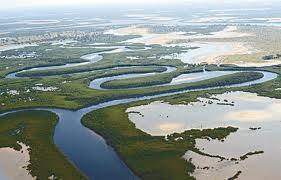 There are many bird species that can be seen in the reserve. Some of the most common are the Little Stint, Ruddy Turnstone, the Eurasian Spoonbill and the Greater Flamingo. The park encompasses 76,000 hectares. About 61,000 hectares of the site is comprised of water.

About 7,000 hectares are made up of saltwater vegetation and inter tidal mangroves. The Saloum Delta National Park is included in the 180,000 hectare biosphere reserve. Forests and savanna take up 8,000 hectares.

The park was set up in 1976. Since it emerged, the importance of the park has grown both as a tourist attraction and a nature reserve. Due to this fact, the country and the international community have taken measures to protect the site. Since it was declared a national park, the park has been given extra protection.

A good portion of mainland was joined to the park in 1981. Shortly thereafter, the site was declared a part of the World Biosphere Heritage. 1984 was the year the park became a Humid Zone of International Importance or RAMSAR site. This title was accorded because the park is home to many kinds of paleoarctic birds.

Senegal itself has been inhabited by people for a very long time. There is evidence of human settlements in the area 350,000 years ago. Many archaeologists assume that these people were Neolithic and Paleolithic, but the truth is nothing much is known about them. More research is required.

Tours to Senegal are priced according to many factors. A week long stay with hotel accommodation, guide, food, etc will cost about 2500 USD for a single person.

The landscape of the park is notable for its swamps, dunes and small islands. It is this setting that makes it attractive to several birds. Apart from the bird species mentioned earlier, there are hundreds more bird species to be seen. Among them are the pink flamingos, storks and pelicans.

The Saloum Delta National Park has many features, and the ones mentioned here are just some of them. Once you visit the site, you will undoubtedly discover more.