The Santiago de Compostela Cathedral is one of the most famous religious edifices in Spain. According to legend, it is the final resting place of Saint James the Greater, the apostle of Jesus. 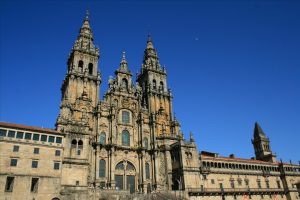 The cathedral is located at Santiago de Compostela in Galicia.

The cathedral is 22 meters high and 97 m long. The interior design is barrel-vaulted cruciform Romanesque. There are two lateral aisles, a nave and a wide transept. There are radiating chapels and a choir.

The organ is particularly striking. Probably the highlight of the church is the Portico da Gloria, dating from the 12th century. This is at the western facade of the Santiago de Compostela Cathedral. Dating from 1168 and 1188, this Romanesque sculpture was created by Master Mateo for king Ferdinand II of Leon.

Under the altar is the crypt. It is the repository of some relics of Saint James. There are also relics from his disciples, Saint Athanasius and Saint Theodorus. The silver reliquary of Jose Losada was inserted in the crypt towards the end of the 19th century.

Building of the present cathedral took place in 1075. It was constructed on the site of an old church. According to legend, the site where the old church was built was where James the Apostle was buried. The building of the cathedral began under the rule of Alfonso VI of Castile (1040-1109).

Construction was also made possible by the bishop Diego Pelaez. Some records state the final stone was added in 1122. However, it is very certain that work on the structure continued for some time. The consecration of the cathedral took place in 1128. The Codex Calixtinus states the architect was Bernard the elder and his assistant Robertus Galperinus.

The cost of tours to Spain vary greatly. Some are for less than 1000 USD. There are more luxurious tours costing 3000 USD and upwards.

The nave is made up of 11 bays. Half a dozen bays make up the wide transept. The piers are flanked by semi-columns. Half of them carry the side aisles cross vaults. Three bays cover the choir. The five chapels and ambulatory surround it. The apse vault and the round windows make up the clerestory.

The Santiago de Compostela Cathedral is also known for the baldachin and its giant statue of Saint James. This statue dates from the 13th century. The statue can be seen rising over the altar.