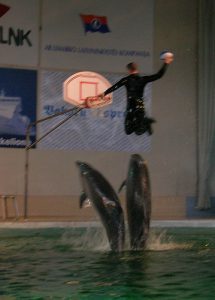 The Sea Museum in Klaipeda is one of the most popular tourist destinations on the Republic of Lithuania. With its mission statement of exploring, enjoying and preserving harmony with the sea, the museum is a truly family-friendly institution that is both fun and educational at the same time.

Among the main attractions in the Lithuanian Sea Museum is its Aquarium, which boasts of 33 tanks exhibiting 40 species of fish from the rivers and lakes of Lithuania, as well as from the Baltic Sea and both fresh and tropical waters. Another popular attraction is the Dolphinarium, a massive arena that showcases amazing performances by trained dolphins and sea lions. The museum also has expositions devoted to sea mammals such as seals, and sea birds, mainly penguins. But aside from marine animals, the Sea Museum also features the Exposition on the History of Navigation, which documents the developments in Lithuanian maritime travel throughout the ages.

The building that currently houses the Lithuanian Sea Museum was originally the Nerija fort, a sea fortress that had been built during the latter half of the 19th century. The fortress was partly destroyed in the end of World War 2, but would later be restored from 1973 to 1979. It was during this period that the Klaipeda Sea Museum was founded on October 1, 1975. The restored Nerija fort officially opened as the Lithuanian Sea Museum on July 28, 1979.