A Senegal River tour will bring you face to face with some of the most interesting sights in Senegal. It may not be the first place you think of when at Senegal, but there is a lot of fascinating things to see by the river. 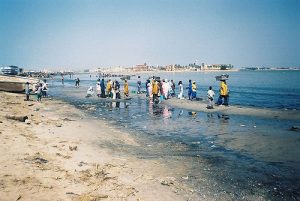 The river is located at the Senegal and Mauritania borders.

There are several structures that can be seen around the river. Among the most notable are the Manantali Dam and the Maka-Damia Dam. The Manantali Dam in Mali was constructed as a reservoir. The Maka-Diama dam is used to prevent saltwater access upstream. This is near the Mauritania-Senegal border close to the sea outlet.

A Senegal River tour will show that the fauna is similar to that at the basin of the Gambia River. The marine life is varied. However, only one fish and three frog species are endemic in the site.

Most of the early Mediterranean civilizations were aware of this river. Pliny the Elder referred to it as the Bambotus. Claudius Ptolemy called it Nias. Around 450 BCE, Hanno the Carthaginian came to the site as he was making his way to Theon Ochema (Mount Cameroon) from Carthage.

There is evidence of trade here to the Mediterranean until Carthage was destroyed in 146 BCE. It was around 800 CE when the river managed to regain contact with the Mediterranean world. This became possible after the Trans-Saharan trade route between the Ghana Empire and Morocco was set up.

Eventually, the river made its way into the center of the gold-producing Ghana Empire. It would also reach the Mali Empire. These would earn the river the moniker River of Gold. This story would reach the ears of the Mediterranean merchants. They would lead expeditions into the river.

Travel tours to Senegal have varying price tags. For a 7 day tour with guides, hotel accommodations etc, the cost will be around 2000 USD at least. Shorter tours will of course cost less.

A Senegal River tour is one of the best ways to understand its importance to the country. It is a beautiful place, and knowing a bit of its history will make you appreciate it more.