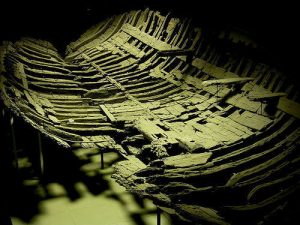 The wreck of the Kyrenian Ship is one of the most significant discoveries in the history of marine archaeology. It was such an important find that an entire exhibition, the Shipwreck Museum in Kyrenia, Northern Cyprus, had been built around it.

The Shipwreck Museum can be found within Kyrenia Castle, which is located at the east end of the old harbor in the town of Kyrenia on the northern coast of the Republic of Cyprus. The public transportation in Kyrenia is not very good, so the best way to travel around the town is via a rental car.

The Shipwreck Museum is built among the gothic halls along Kyrenia Castle’s eastern wall. It houses the well-preserved remains of a 2,300-year old Greek merchant ship, the oldest ship ever recovered anywhere in the sea. With a hull measuring 47 feet long, the Kyrenia ship was constructed mostly out of Aleppo pinewood coated in lead, and is preserved under a controlled environment. Also on display is the ship’s complete cargo, which includes more than 400 amphorae (wine jars), 9,000 almonds, 29 millstones, 4 drinking cups, 4 oil jugs, 4 salt dishes, and 4 wooden spoons. These artifacts actually go a long way in determining the ship’s ports of call, the number of crewmen, and how they survived on the seas. The museum’s upper level displays photographs of the ship’s recovery process, and there is also a platform that gives visitors an overhead view of the wreck.

The main exhibit of the Shipwreck Museum, the Kyrenia Ship, was the remnants of a Greek trading vessel dated back to the 4th century BC. Sailing the Mediterranean Sea during the time of Alexander the Great, it is estimated to have sunk at around 300 BC. A Greek-Cypriot diver named Andreas Cariolou would first discover the shipwreck during a storm in November 1965. However, he lost the ship’s exact position, and it would take him over 200 dives before he rediscovered it near Kyrenia in 1967. The ship was raised by a salvage expedition conducted from 1967 to 1969. The preservation of the ship began in 1970, lasting for 4 years. With around 75% of the ship in good condition, it is considered as the only well-preserved ship from the Classical Age of Ancient Greece.

The admission fee to Kyrenia Castle (which includes entrance into the Shipwreck Museum) is 3.60 Euros for adults and 0.80 Euros for students.