Sihanoukville – Cambodia is a port city also known as Kampong Som. This province is flanked by beaches and islands thereby making it an excellent beach holiday getaway for travelers from all parts of the world.

Getting to Sihanoukville – Cambodia can be via air or road travel. There is an international airport within the province about eighteen kilometers off the city centre although commercial flights are rather limited.

The nearest airport that has international flights is the one located in Phnom Penh. From here, you can take a shared taxi or bus to Sihanoukville which will take about three to four hours.

Buses and shared taxis or cars are available from 7 in the morning until about 2:30 in the afternoon.

Beaches are the top tourist spots in Sihanoukville – Cambodia. You can check out Ocheteaul Beach located on the eastern section of the province. From the downtown area, this is about a five-minute ride on a motorcycle – the most common mode of public transport in the province. 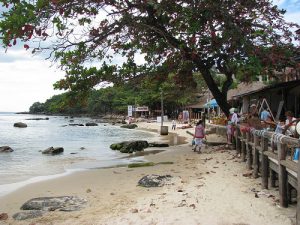 There are beach stands and chairs here where you can have a taste of Khmer cuisine.

Other beaches to check out are Victory Beach which is close to the city port; Serendipity Beach where there is an abundance of Western-inspired bars and diners; and Hawaii Beach where you can rent small boats to explore the islands.

This enabled the province to enter into international trades. The port was built in 1955 and the workers remained here hence; they were the very first settlers in the province.

This port has become an important trade route for Cambodia thereby greatly helping in developing the country’s economy.

Accommodations are via guesthouses and hotels which can range from $2 to $6 per person for the lower range; mid-range is about $12 to $15 per night, per person; while luxury hotels can cost $1,500 up to $3,000 per night, per room.

Sihanoukville – Cambodia is best visited during the months of November through February. Weather conditions during this time are favorable: cooler climate and sunnier days.