The Soroca Fortress in Moldova is an ancient stronghold built during the late 1400s. The well preserved nature of the place has turned it
into a tourist hotspot in Moldova.

The city is located by the Nistru River. It is 160 km to the north of Chisinau. Once in the city, you will be able to see the fortress.

The fortress shape is a circle. There are five bastions surrounding it at equal distances. The fortress has a diameter of 37.5 m. Approaching the entry gate, one will see a church. This was built by the military.

Not far off are the Bechir canyons. The stone hermitage can be seen there. This relic goes back to the 9th century. There is also the hill of sedentary gypsies with their unusual dwelling places. The 19th century country hospital and girls’ gymnasium (also from the 19th century) are there too. 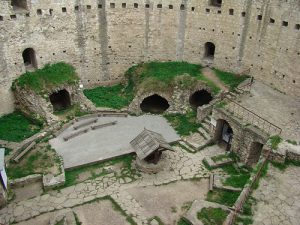 The Soroca Fortress in Moldova has its origin at the Genoese trade post at Olchionia. The stronghold was established by Moldavian Prince Stephen the Great Stefan cel Mare. Construction began in 1499. The original fort was wooden. It was used to join up the forts made up of Akkerman, Khotin the three forts at Moldova and two at Danube.

The period 1543 to 1546, the fort was rebuilt. It assumed the form of a stone circle. The bastions were also installed at this point. The fort would prove instrumental in many battles including the Great Turkish War and the Pruth Campaign of 1711.

Fees may vary depending on which tour provider you choose. The typical rate is about 50 Euros per person. This will include entrance to the site, museum fees, a guide and transportation.

Visitors can also drop by the museum explaining the city’s origins. The 19th century “T. Stratilat” church is admired for its eclectic design. The “Adormirea Maicii Domnului” church and the stonemasons’ village are not far off either.

The Soroca Fortress in Moldova is open everyday from 9 in the morning until 6 in the evening. It is closed during Mondays. There are guided tours in Spanish, English, Russian, French and Romanian.