The Studenica Monastery is one of the most frequently visited monasteries in Serbia. This UNESCO World Heritage Site is also a very important historical site. 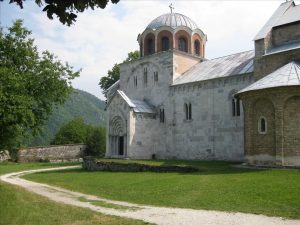 The Orthodox monastery is 39 kilometers to the west of Kraljevo. This is in central Serbia. Tour providers can transport you to the site directly.

The most striking sculptures in the Studenica Monastery are at the Virgin Church portals. These are at the exonarthex, between the narthex and the west one. At the north wall is a window with medallions. There are animals depicted here representing the virtues of the Virgin.

The Church of the King also has some remarkable paintings. Some of the finest are at the narthex of Radoslav. At the chapel of St. Nicholas there is a Hetoimasia composition.

Under the leadership of Sava (the third son of Stefan), the monastery became a spiritual and political center. It was also Sava who created the “Studenica Typikon” liturgical book. In it, Saint Simeon’s life is detailed. In 1235, King Radoslva built a narthex. King Milutin would later on make a church for saints Anna and Joachim.

Tours of Serbia will cost at least a hundred Euros or so. More extensive tours of the monastery and the other tourist areas are of course more expensive.

The monastery is also known for the rosettes at the north wall, symbolizing the Divine Eye. Parts of the frescoes at the altar are still intact. There are also frescoes at the nave’s lower registers. The most stunning is the Crucifixion. This was created in 1209. It is considered one of the finest examples of Serbian art.

A visit to the Studenica Monastery gives you the chance to see the “founders’ composition” at the south wall. The Virgin is depicted there. There are also frescoes depicting the Last Judgment.