The Surya Vinayak in Bhaktapur city is one of the most popular pilgrim sites in Nepal. Of the many religious shrines in the country, this is considered one of the most remarkable. 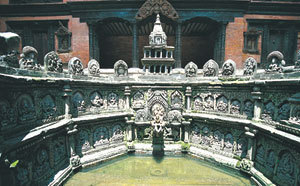 The shrine is located about two kilometers from the city. The place is situated in a forest and can be reached on foot.

The shrine is dedicated to Ganesh, the elephant headed god of well started and successfully completed works. It is situated so that it will get the rays of the sun as it rises. Watching the sun rise can be quite a spectacular site.

From the shrine, you will be able to see Bhaktapur. Snow laden peaks serve as the background. The combination of the scenic forest and views make it a place of serenity and beauty. Getting to the hilltop is not that difficult because there are stairs, albeit steep.

The god Ganesh is under a white shikhara and golden torana. Set on a pillar in front of Ganesh is a rat. The rat is considered the vehicle of the god. A 5 minute walk to the hilltop will bring you to the shrine of the goddess Parvati. She is the mother of Ganesh.

Followers of Ganesh believe that a visit to the shrine will earn the blessings of the god. It is thus customary for explorers to visit the shrine first before embarking on a journey. In this area, the god is known as Sun Ganesh.

Since the shrine Surya Vinayak in Bhaktapur was built, devotees have been flocking to it. Parents pray to the god if their young children are having trouble learning to speak. People who are starting a new business also go there. These days, almost anyone who is starting a new endeavor will go to the place.

The fares will vary depending where you are coming from. The bus fare from Kathmandu to the city is from 35 to 38 NRS. If taking a taxi from Thamel, the cost is 800-1000 NRS one way.

For leisurely strolls, head down to the highway and go ascend the hill. It is a good place to take pictures of the city. The peaks of the Himalayas will serve as the perfect backdrop. This area is only 20 minutes away from the temple.

The area around Surya Vinayak in Bhaktapur is also a popular picnic spot. This is due to the beautiful scenery around the shrine.