The Sutjeska National Park is Bosnia’s oldest national park. It is best known for the monuments dedicated to the Partisan victory over the Germans in WWII. 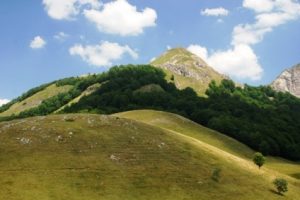 The park can be found at the eastern section of Bosnia and Herzegovina. This is near the Montenegrin border. It is by the Belgrade-Visegrad-Srbinje-Tjentiste Dubrovnik-Trebinje route.

Aside from the monuments, the park is home to one of the last European primeval forests called Perucica. There are 60 meter beech trees all around.

You will see the Skakavac waterfall too. It is 70 meters high and covered by large trees. Sutjeska National Park is also the home of Maglic, the highest peak in Bosnia at 2386 meters. It is a great place to go climbing. Equally challenging is Zelengora Mountain. Wolves and bears are seen in the park too.

Since Neolithic times, the land making up Bosnia has been inhabited. Who these early people were is still unclear. What is certain is that the Illyrians had taken over by the time of the Bronze Age.

At the start of the 3rd century BC, the Celts started coming to the area in droves. The Celts would mix in with the Illyrians. By the 9th century, the Romans had taken over the area.

It was around the 1st century when Christianity started making its presence felt. There is substantial evidence for this in terms of artifacts and relics. From 337 to 395, the Roman Empire was split into the east and west.

The area ended up in the western empire. In 455, the area was taken over by the Ostrogoths. The land would fall under the control of the Huns the following year. In the 6th century, it would become part of the Byzantine Empire.

There are hotel and lodging accommodations in the park. There are also motels where visitors can stay. The Sutjeska River is another fascinating sight. Equally interesting is the Volujak Mountain.

The Sutjeska National Park also has many areas where you can take leisurely strolls and walks. There are also mountain huts nearby.