A trip to Table Mountain National Park is one of the highlights when at Western Cape in South Africa. Originally established to protect the wildlife and environment, it has become known for its unique fauna and tourist attractions. 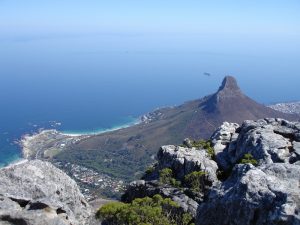 The park is situated in the South African Western Cape province. The park runs about north-south by the mountain range, comprising the Cape Peninsula spine. This goes from Signal Hill north through the southern peninsula mountains. It culminates at Cape Point.

The Cableway brings the tourist from the Lower Cable Station to the mountain top. There is also Boulders Beach, known for its African Penguins. Two of the most scenic spots at the park are the Cape of Good Hope and Cape Point.

A trip to Table Mountain National Park will also bring you up close with the Lions Head and Signal Hill. The waters are ideal for scuba diving. The landscape is ideal for hikers.

Aside from the animals, the park is rich in flora. Asteraceae, restio, erica and geophytes, can be found all over the place.

The park is made up of the greater Table Mountain chain and includes a good portion of Cape Point. Silvermine and Tokai Forest are included. Through the years, the park has undergone changes and modification. The Boulders coast is protected as is the Cape of Good Hope.

Other protected areas are the Paulsberg snd Castle Rock. The Silvermine-Tokai portion goes northwest-southeast by the peninsula. This is from the seaboard of the Atlantic to the coastline of the False Bay. It contains the Kalk Bay mountains, Steenberg Peak and Constantiaberg.

The section was created by the Tokai State Forest. The portion of Cape Point includes the Cape Peninsula and Scarborough. It was created from the Cape of Good Hope Nature Reserve.

Leopards can still be seen as well as the black-backed jackal. The bontebok, eland and mountain zebra are also in the area.

A trip to Table Mountain National Park will reveal other animals like the rock hyrax, caracal, antelopes and klipspringer. The southern portion of the park is home to the Chacma Baboons.