The Taj Mahal in Agra City, India is one of the most magnificent monuments ever built by man. It is India’s most recognized symbol.

The monument is in the city of Agra in Uttar Pradesh state. It is 125 miles (200 km) distant from New Delhi. You can get there via the Agra Cantt railway station. If you are in Delhi, you can take the Shatabdi Express. You can also fly in from Delhi and the other major cities.

The building is an outstanding example of Mughal architecture. It fuses Indian design with Persian and Islamic styles. One of its most distinguishing features is how the color appears to change as the day goes on. This is due to the structure’s interaction with light. 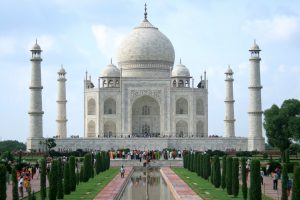 This is best seen during the early morning. The color change occurs as the sun rises. The area from across the river banks gives a lovely view of the structure.

The history of the Taj Mahal in Agra City goes back to 1630 AD. The monument is the final resting place of Mumtaz Mahal. She was the wife of Shah Jahan, the Mughal emperor. When she died, Shah Jahan ordered the structure built as a testament to his undying love. The monument took 22 years to build. Made of marble, it required 20,000 workers to finish the job.

These fees are good for half an hour in the monument. You need to get the tickets 24 hours before your visit. These can be obtained from the Archaeological Survey of India office on Mall Road.

The Taj Mahotsav is held in Shilpgram in Agra close to the monument. The date is February 18 to 27. The event focuses on Indian culture, arts and crafts. There are also processions featuring elephants and
drummers. Threre also special shows held during the festival.

The Taj Mahal in Agra City is open 6:00 am to 7:00 pm. It is open daily except during Fridays for prayers. The monument is available for moonlight viewing 8:30 pm to 12:30 am. This is a couple of days prior and after the full moon.