The tourist attractions in Tesanj have made it one of the most interesting places you can visit in Bosnia. It may not yet be as well known as the other sites in Bosnia. But there is plenty to see here. 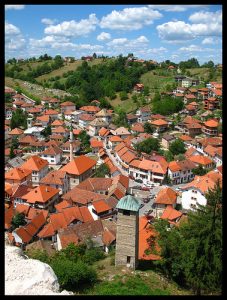 This is a municipality and city which can be found in Bosnia and Herzegovina. It is close to Zavidovici, Doboj and Teslic.

The most distinguishable feature of the site is the castle bearing the same name. The castle spans an area of 6,296 square meters (67,770 sq ft). The date of its construction is unknown. There is also the Eminagic House, said to be the oldest in the city.

It is also one of the biggest tourist attractions in Tesanj. This was probably built sometime in the 17th century. The Old Town is also worth a visit for the other ancient structures around it. There is also the 18.5 meter high tower. The Objesenica cemetery in the city center is worth checking out too.

The current name of the city was first recorded in the 1461 charter by King Stephen Tomasevic to Radivoj Krstic, his uncle. He was giving his uncle possession of the city. The 15th and 16th centuries saw the city coming under the rule of various powers.

Occupation and rule changed between the Hungary and the Ottoman Empire. The years 1463 to 1476 saw the city become the capital of the Bosnian kingdom. It also became the Duke Radivoj Kotromanic’s residence. For the most part of the 15th century onwards, the city was under the rule of the Ottoman Empire.

One of the most influential was Sandzak-bey Gazi Ferhad-bey. It was under his rule that the city made rapid progress. His most important contribution was Ferhadija Mosque (1563). This mosque can still be seen today. When Gazi Ferhad-bey died in 1568, he was buried at the mosque yard.

Travel packages to the city are priced based on duration. A two week guided tour of the country will cost at least 2000 USD. The price will also be dictated by the itinerary.

A 1999 study showed that the municipality had 52,249 residents. This included 13,798 refugees. Most of the people in the area are ethnic Bosniaks.

Before checking out the tourist attractions in Tesanj, knowing some facts about the place will be helpful. Some of the most noteworthy places in the municipality are Hrvatinovici, Vukovo, Tugovici and Tesanjka.