Acropolis of Athens tours are very popular in Greece. Of the numerous tourist and archaeological sites in Greece, this is probably the best known. 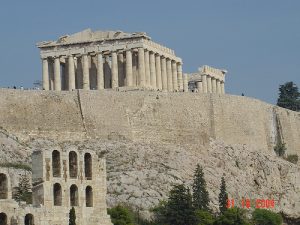 The acropolis is a piece of flattened rock about 490 feet (150 m) above sea level. It is in Athens. You will find the entrance at Theorias Street. At the Akropoli metro stop, go west to Dionysiou Areopagitou Street.

Take the first right and you will be at Theorias. At the Thissio metro stop, go to Monastiraki then Apostolou Pavlou Street. Go left, then south then left.

The Parthenon is the biggest temple on the site. It was the holy temple of Athena. It was later changed into a mosque. Also worth checking out is the Temple of Athena Nike. It is the very first temple to be constructed in the Ionic manner.

Acropolis of Athens tours will also take you to the Erectheion. This temple was holy to Poseidon-Erechtheus, Athena and Attica. The Propylea is the gateway to the site.

The New Acropolis Museum is at the southern section of the site. Opened in 2008, it is a repository of relics, artifacts and information related to ancient Greece.

The oldest artifacts uncovered go back to the Middle Neolithic era. However, there are those who contend the area had been settled in as far back as the Early Neolithic (6th millennium BC). Several researchers also believe a Mycenaean megaron was once set on the hill. There is nothing of the megaron remaining however.

Archaeologists have also discovered that a Cyclopean massive circuit wall was constructed. This wall, 6 meters thick was the acropolis defense up to the fifth century. The temple of Athena Polias was built around the middle of the 6th century. The late 6th century saw the building of another temple, Archaios Naos.

The general admission fee is 12 Euros. The admission fee to the New Acropolis Museum is 5 Euros. However, there are days when the site is free to enter. You should get in touch with a tour operator; they have several packages.

Acropolis of Athens tours can be held from 8:00 am to 7:00 pm during the summer. During the winter it opens at 8:00 am until sunset.