The Cedars in Bsharre (also spelled Bcharre and Becharre) are among the last remnants of the Cedars of Lebanon. Because of their beauty and importance, the groves were included in the UNESCO World heritage list in 1998.

Bsharre is close to Kadisha Valley. It can be found in the North Governorate’s Bsharri District. One way to reach the site is via Deir al Ahmar at the Beqaa Valley. The road will end up at Mount Lebanon’s slopes.

As you reach the crest, the grove will become visible below. Another way is by going from Chekka and straight to Bcharre. Chekka is just south of Tripoli.

Before you get to the Cedars, you will pass the residents’ community. You will see restaurants, nightclubs, souvenir shops, chalets and hotels. A kilometer on and you will end up in the grove 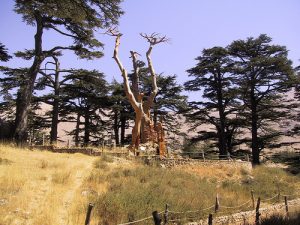 itself. At the north are the cedars in the Horsh Ehden Nature Preserve. Some of the finest trees are close to Tannourine and Hadeth al-Jubbeh.

The best known are the Cedars in Bsharre, also called the Arz el Rab (Cedars of God). There are 375 of these situated around Mount Makmel. Many are hundreds of years old.

The present grove emerged from cedars and other trees like oak, pine and cypress. Records show that people began exploiting the trees as early as 3000 BC.

The Persians, Assyrians and Babylonians all made use of the timber. The Phoenicians made their merchant fleets from the cedars. There is an inscription of Nebuchadnezzar stating he used the cedars to construct his temples.

The cost will depend on where you are coming from. If you are coming from Tripoli, the charge will be at least $15. Taxi fares may start at $20. The fares will be different if you are traveling via a tour provider. The forests may be visited any day of the week except Mondays.

There are other tourist attractions in the site, including the Kadisha Valley and the Khalil Gibran Tomb and Museum. The place is also known as a skiing destination. Skiing season is typically from December to April. There are now several ski shops where you can buy equipment. Instructors are also available.

Aside from the Cedars in Bsharre, the villages around the Kadisha Valley are also worth visiting. One of the most noteworthy is Hadeth al-Jubbeh, a village dating back to the 6th century AD.