The Dilmun burial mounds are considered as some of the most significant archaeological sites in the world. Very important for historians and archaeologists, they are also tourist attractions. 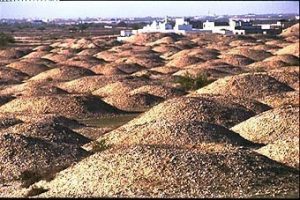 These burial mounds are located at the western end of the country. The site is well known by locals, so you should not have problems getting there.

The site is the biggest necropolis in the country. The mounds have different sizes. Many of them however, are 1 to 2 meters high. Several of the mounds have dimensions of 4.5 x 9 meters. The smaller mounds have a single chamber only. A few have pairs of niches along
with the center point of the larger chambers.

These mounds date back from the 3rd millennium BC to the 1st millennium AD. A group of Danish excavators uncovered the tumuli while digging up the Bronze Age capital city. All of the tumuli found are comprised of middle stone cavity. This is surrounded by a ring wall, crushed rock and soil.

Unlike some of the sites in Egypt, plundering has not greatly affected the mounds. Their original form has been preserved. The only changes have been brought about by erosion. Research shows that different kinds of materials were used to build the tombs. Among those used are wood, plaster, limestone and earth.

Car rentals cost 10 to 20 Dinars a day. If you came by bus from Lulu parking, turn from the entrance and get out of the park. You will see the car rentals there. Bus fares are cheap. The drawback is the schedule can be confusing.

Taxi fares range from 3 to 5 Dinars in Manama. However, this may not be applicable to other areas on the island. If the meter is “broken”, negotiate with the driver for the price.

The remains in the mounds were typically set with the head at the alcove’s end. Many of the bodies also had some items accompanying them. The items vary; some consist of simple pottery. Others included stone stamp cachet or armor. Other items that were found include stone jars, baskets and numerous items made of ivory.