The Giant’s Causeway in Northern Ireland is one of the most recognizable landmarks in the country. It is a UNESCO World Heritage Site.

The rock formation can be found at Northern Ireland’s Antrim coast. You can get there by taking the bus going to Portrush. The train service at Coleraine can also take you there. There are daytrips from Belfast as well. If you are driving, just follow the causeway route signs along the road. Other routes include A2/A37 from Derry and A26 from Belfast.

The causeway is made up of 40,000 basalt columns emerging from the waters. The first place to go to is the visitors’ center. From there you will see and cross a road leading to the Giant’s Causeway in Northern Ireland. It will take 20 minutes to walk around and enjoy the scenery.

You can have pictures taken by the rock columns. Just be careful so you don’t end up being drenched by the water. 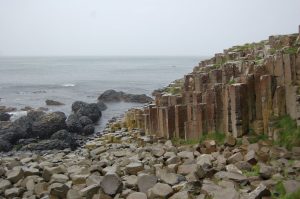 The rocks formed nearly 60 million years ago. Antrim was the center of volcanic activity. Molten basalt emerged to form the lava plateau. Contraction took place as the lava cooled. The column dimensions are determined by the rate of lava cooling. The columns on the formation are due to the fracture network.

According to legend, the causeway was created by Irish warrior Fionn mac Cumhaill. He created the causeway so he could fight Benandonner. The myths about the causeway match with the geological records insofar as the presence of basalt in Fingal’s Cave. This can be found in Scotland’s Isle of Staffa.

There is no entrance fee to the causeway. But the parking fees cost 6 Pounds. The causeway railway car park costs 4 Pounds. Parking at the main road is farther away, but it is free.

There is a gift shop nearby where you can buy kitchenware, stationary and other souvenirs. If you are looking for a place to eat, try Thyme&Co in Ballycastle a little up the road.

If you are planning a trip to Giant’s Causeway in Northern Ireland, keep in mind that they only accept Pounds. If you have foreign currency, exchange them first.