Aside from the Great Pyramids, the Great Sphinx of Egypt is another major attraction in the Giza plateau. With the head of a man and body of a lion, it is the subject of numerous legends and myths.

From central Cairo, you can ride a taxi that will take you to Giza. You should ride the yellow or white taxis. These are metered and have air conditioning. You can also reach Giza via the bus. The most ideal options are bus routes 357 or 355. Look for buses with the CTA mark. The ticket price is around LE 2.

The cheaper options are buses 997 and 900. These can be found at the central station near the museum. If you take 997, wait for the Light and Sound show sign before getting off. The pyramids will be close by. There are also rail services that can take you to the site.

The most striking aspect of the man-lion statue is the size. It is 22 m wide and 45 m long. The head is wearing the headdress of a pharaoh. The whole structure is carved from a single sandstone block. The nose is conspicuously missing. It may have been damaged centuries ago. 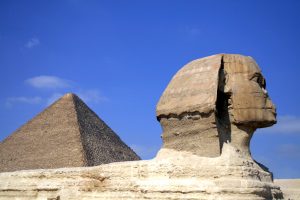 The opinion of many Egyptologists is that the Great Sphinx of Egypt represents Khafre. They believe that it was built around the same time as Khafre’s pyramid (c 2500 BC). However, it is very difficult to give a precise date. Some archaeologists say that the statue could be much older.

The ancient Egyptians called it Re-Horakhty (“Horus of the horizon”). It was also known as Abu el-Hol, the “Father of Terror”. The ancient Greek writers referred to it as the Strangler. The reason for its many names is unknown.

This will depend on the tour package / guided tour you avail of. On the average, people spend $100 a day. However, there are many different tour packages available. The Light and Sound show near Giza has separate charges and fees.

If you are planning to visit the Great Sphinx of Egypt, make sure the package includes the entrance fee to it. Majority of these tours provide an English speaking guide.