Helsinki is the capital city of Finland and also its biggest city. It is a mix of the cosmopolitan air of a modern metropolis and an old, nostalgic aura from its various historical structures.

The Helsinki Cathedral – Finland is one such historical structure set against the backdrop of a modern city. 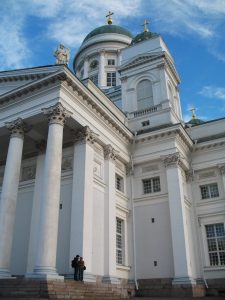 The Helsinki Cathedral – Finland is located in the Senate Square, at the corner of Unioninkatu Street and Aleksanterinkatu Street.

You can fly in to Helsinki via the Helsinki-Vantaa International Airport, approximately twenty kilometers off the northern parts of central Helsinki. From the airport, the best way to reach the city center is via taxi.

To reach The Helsinki Cathedral – Finland, you can take the tram. Trams 1 and 2, and 3B and 3T can take you to the nearest point to the cathedral.

Upon seeing the Helsinki Cathedral – Finland, what will most likely strike you first is its large green dome, flanked by four smaller domes on each side.

On different parts of the roof, from all four sides, there stand statues of the 12 Apostles; as if keeping watch over the flock that come here to worship.

Below the steps that lead to the cathedral, another striking feature that you will see is a grand statue of Emperor Alexander II.

While the exteriors of the cathedral were made after the majestic Neo-Classical architectural style, the interiors are somewhat minimalist in style but still rather grand in its own way.

The altarpiece inside the cathedral date as far back as the late 1800s. It is flanked by angels on each side. An interesting part of the interiors is the crypt, with its rather subdued ambiance, that now serves as a coffee shop.

The Helsinki Cathedral – Finland, more formally known as the Evangelical Lutheran Cathedral, was initially constructed to pay homage to Russia’s Tsar, Nicholas I.

It was then known as the Saint Nicholas Church. The cathedral was made in the design laid out by Carl Ludvig Engel, a German architect best known for his Neo-Classical designs.

Construction began in the year 1830 under Engel and he oversaw work until he passed away in the year 1840. The project was then undertaken by Ernst Lohrmann.

It was Lohrmann who actually added the statues of the 12 Apostles. He also added the bell tower and a small chapel. The cathedral was finally finished in the year 1852.

There is no entry fee to visit the Helsinki Cathedral – Finland. Tram tickets cost about 1.80 Euros. The tickets are valid for only an hour.

The Helsinki Cathedral – Finland is open everyday from 9 in the morning up until about midnight during the months of June thru August.