Jiufen would have been a ghost town had it not been for its historic district that made it a popular destination for locals and tourists wanting to experience firsthand a bit of the country’s cultural heritage. 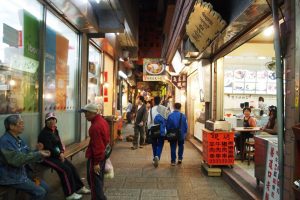 The Historic Commercial District of Jiufen – Taiwan is covered by the streets Jishan and Shuchi; on the hillsides that lie along the coast. Jiufen is within the Ruifang District, north of Taiwan.

The easiest way to reach the Historic Commercial District of Jiufen – Taiwan is via Taipei. You can take a train or a bus going to Jiufen and from there, you can easily explore the old town on foot.

Alternatively, you can take a direct bus from Taipei: bus number 1062 which is the Jiufen bus.

Walking down the Historic Commercial District of Jiufen – Taiwan is like walking back in time.

Here, you can see old establishments such as shops, restaurants and teahouses preserved over time; keeping their ambience and flavor just as they were during the gold-mining days of this village.

The most common establishment name that you will come across this historic district is “City of Sadness” owing to the fact that Jiufen was featured in a film of the same name.

Local dishes that are popular in restaurants and teahouses include the yam dish and Kung Fu tea.

You can also get magnificent vistas of the Pacific Ocean and the harbour from the streets within the historic district.

Jiufen used to be a booming gold-mining village until mining experienced a sharp decline some time in the 1950s, after the Second World War. In the year 1971, mining activities ceased.

The locals feared that the village would soon become a ghost town as they had no main source of income but when the town was featured in the film “A City of Sadness,” curiosity about this little village peaked and people started coming in, mostly locals from other cities in the country.

The village’s name originates from the early days of the town when there were only 9 families living here.

When commodity shipments arrived at the harbour, people would often get “nine portions” which in Chinese is “jiufen.” The term was later on adopted as the name of the town.

There are no hotels in Jiufen but there are bed and breakfast inns. Accommodations in the village cost about TWD 1,500 to TWD 2,000 for a double room, inclusive of breakfast.

In the year 2001, Jiufen was once again used as a backdrop for a film. This time, it was an anime film called “Spirited Away” that used the town as a model.