A Jokulsarlon Lagoon trip can be an exciting adventure. One of the best natural attractions in Iceland, this glacier lagoon is the biggest in the country. 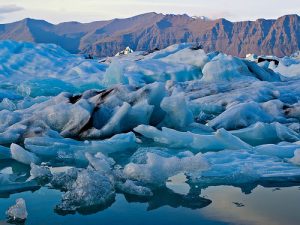 The lagoon is visible between Skaftafell and Hofn by Route 1. It is by National Highway 1. If you drop by the side of the road you will see it. You can get there by car rental from Reykjavik or by taking the public bus.

The white glacier white cap is the most dominant feature of the lagoon. People go here to simply admire the view. The combination of the glacier and the skies make it one of the most scenic places in the country. Visitors can also avail of boat tours around the area.

Adjacent to the lagoon is an office where the trips are scheduled and made. There are also jeep tours that go on some of the ice caps. These trips take place from June 15 to September 15.

The lagoon is home to different types of fish. It is not uncommon to see large clusters of seals here, trying to get some of the fish around the winter.

Large numbers of arctic terns and seabirds can be seen around the lagoon as well. You will see them go after herring, salmon and krill. A Jokulsarlon Lagoon trip would not be complete without seeing these creatures.

The earliest settlers appeared around 900 AD. During this time, the glacier edge was about 12 miles (20 km) further north than the current location. It grew about 1 km off the Jokulsa River coast around 1900 AD.

Due to fluctuating temperature between the 1920s and 1960s, the glacier tongue underwent changes. Icebergs of different sizes began falling, creating the lagoon. The bulk of the creation process occurred in the years 1934-35. Currently, the lagoon has a depth of 660 feet. Its area is now 18 km2 (6.9 sq mi).

There is no entrance fee to the site.

The lagoon has been featured in several movies. It was featured in the James Bond films A View to a Kill and Die Another Day. It was also seen in the films Lara Croft’s Tomb Raider and Batman Begins.

On your next Jokulsarlon Lagoon trip, make sure to check out the skuas. These are giant seagulls that set their nests at the shore. Keep a good distance away from these birds though, as they can be very aggressive.