Home
Asia
The Kingdom of Aladdin in Doha – Qatar

It is known by a number of names, such as “Entertainment City” and “The Family Fun Park of 1,001 Delights.” The only amusement park not just in Qatar, but also in the whole Persian Gulf, the Kingdom of Aladdin is truly the only one of its kind in that area of the Middle East. 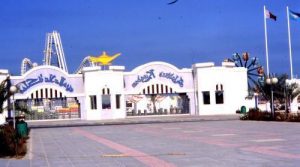 The Kingdom of Aladdin is situated in the West Bay Area of the capital city of Doha in the State of Qatar. There are no buses in Qatar, so tourists to the country can get around only by renting a car or taking a car to their chosen destination.

Many of the familiar amusement park attractions can be found in the Kingdom of Aladdin, such as a Ferris wheel, a carousel, bumper cars, and its roller coaster, the “Thunderbolt” (also known as the “Thunder Bullet”). Other attractions include bumper boats, go-karts, a trampoline, an air hockey arena, and a video game arcade, as well as a Print and Stamp station that enables kids to engage in arts and crafts. The park also holds a daily costume parade, and there is also an amphitheater that hosts special events, including a fireworks show. There are even 2 mosques in the park, one for males, and the other for females. There are also several restaurants found within the park, as well as a number of hotels nearby.

Opening in 1994, the Kingdom of Aladdin was built with the aim of strengthening the belief of the Arab people in their heritage, blending it with a sense of fun and wonder in the magic of the myths of their culture. The park’s name was chosen in a national competition, the winning entry derived from the well-known character in the 1,001 Arabian Nights of Scheherazade.

The Kingdom of Aladdin sets schedules for specific groups of people. On Mondays and Wednesdays, the park is open to women and children (which include boys below the age of 12). The entire family is admitted into the park on Tuesdays, Thursdays and Fridays, which are the “family days.” The park is rented out for private parties on Saturdays. Sunday is the park’s “general public day,” where only male adults and boys above the age of 12 are allowed inside.