Las Vegas is a highly popular tourist destination by travelers from every corner of the world. Dubbed as the “entertainment capital of the world,” Las Vegas attracts hundreds of thousands of visitors year-round.

The Las Vegas Strip in Nevada – United States is where you will find some of the most widely-visited hotel casinos in the world. 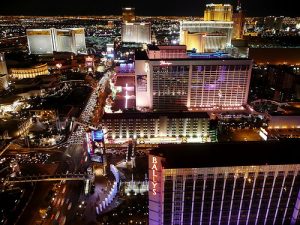 The Las Vegas Strip in Nevada – United States is located in Clark County, south of Nevada. It isn’t actually within the city of Las Vegas. The Strip is along Las Vegas Boulevard.

You can fly in to Las Vegas via the McCarran International Airport which is served by both local and international flights.

From the airport, the easiest way to reach the Las Vegas Strip in Nevada – United States is via a taxi ride. You can also take a bus to the Strip right from the bus stop within the airport grounds.

Shuttle buses are also available and these can likewise take you straight to wherever it is you are going within the Strip. Limos are another option if you want to arrive in style.

For most of the people traveling to the Las Vegas Strip in Nevada – United States, gambling is the main reason for visiting.

However, there are plenty of other things to do here and you will find that these are as flamboyant and flashy as the next.

Over at MGM, there is a Lion Habitat where you can have close looks at the animals. The Garden Café is the perfect spot to cap the activity.

You can also view beautiful flamingos roaming about at the Flamingo Garden. There are other birds here, too; plus turtles and a koi pond.

Even if you are not staying at the Mirage, do not fail to watch the Volcano Show where the volcano located by the front side of the casino “erupts” into a magnificent display of lights.

Last but not the least; take a walk down a transparent tunnel at the Shark Reef Aquarium in Mandalay Bay for good views of sharks, sea turtles and many types of fishes.

The Las Vegas Strip in Nevada – United States, in the strictest sense, used to be only that stretch of road between Sahara Avenue and Russell Road, about a 6.8-kilometer stretch.

Today however, the Strip also includes those resorts that are in close proximity to it; roughly about one mile or more away from it.

The first casino to be built on what would be later known as the Strip, was El Rancho Vegas; which opened on the 3rd of April in the year 1941. It was in operation for twenty years before it was hit by a fire which signaled its end.

With the success of El Rancho, other developers began to build their own casinos in the area. Hotel Last Frontier came after El Rancho and it was opened in the year 1942.

The Flamingo followed and then a lot more other casinos opened later on.

If you would like to travel by limo, expect to shell-out around 35 US dollars for the ride.

A visit to the Shark Reef Aquarium costs about 16 US dollars per person. The cost to gamble depends entirely on your gambling budget or allotted bankroll.

Las Vegas Boulevard is not only famous for the Strip, it is also popular among those looking to enjoy a few hours of shopping. There are various shops located along the boulevard, most of which sell luxury brands and items.