The Mitrovica Bridge in Kosovska is one of the most interesting tourist spots in Kosovo. The bridge is attractive enough on its own. But it is also symbolic of the divide between the Serbs and Albanians. The bridge is also known as the Ibar River Bridge or the New Bridge. 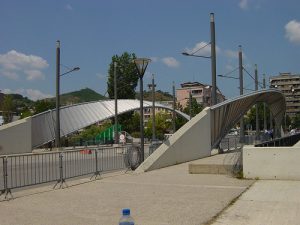 The bridge can be found over the Ibar river. This is to the north of Kosovo.

The bridge is used for crossing, naturally. But it also acts as the dividing line between the 80,000 Kosovo Albanians in the south from the Serbs residing in the north. The Serbs in the north number roughly the same.

The Mitrovica Bridge in Kosovska is of the steel truss variety. It is one of the three bridges at the River Ibar. However, the others are barely utilized. This bridge is the main crossing point of the city sides.

It is also a military checkpoint. In effect, it acts as a border between Kosovo and Serbia. The other two are used for the railway and the other barely used.

Kosovo declared independence on February 17, 2008. However, Serbia still claims that Kosovo is part of its territory. The independence of Kosovo is recognized by 76 UN nations including the US, the UK and France. Russia does not.

The area that makes up Kosovo was originally settled in by different tribal groups. One of the most prominent groups during the Hellenistic and Roman eras were the Dardani. In 160 BC, the land was taken over by the Romans.

It became part of the province of Illyricum. In AD 87, it was included in Moesia Superior. However, there is very little record of the place during the Middle Ages, suggesting the population mixed with the Sklavene.

Some of the online tours you see on the Web include visits not just to Kosovo but also Serbia and the rest of the Balkans. Tours to Kosovo alone will cost about a couple hundred Euros or more depending on how long it will be.

There is more to the town than just the bridge through. There are several ruins of communist industrial architecture here. At the south Albanian side, you will come across several shops, restaurants and cafes. There is also a shopping mall and some Internet cafes.

Apart from the Mitrovica Bridge in Kosovska, there is also an orthodox church at the north side. There is also a mosque and a square.