The National Museum of Mongolian History in Ulaanbaatar, Mongolia gathers together thousands of years worth of that country’s rich cultural heritage under one roof. It houses over 40,000 artifacts chronicling the history of Mongolian culture and civilization from ancient to modern times. 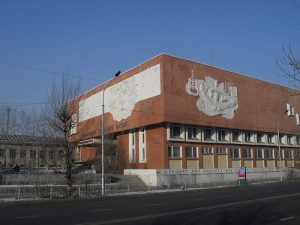 The National Museum of Mongolian History is located on the corner of Juulchin Gudamj and Sukhbaataryn Gudamj in Mongolia’s capital city of Ulaanbaatar.

The first floor of the National Museum of Mongolian History is dedicated to the country’s ancient history. Among these exhibits are artifacts from Mongolia’s prehistoric era, such as stone tools dating back to the Neolithic period (7000 to 2000 BCE), deer stones (stone sculptures depicting reindeers, as well as other animals) from the Bronze Age (2nd to 1st millennium BCE), petroglyphs (rock engravings) from the Bronze Age circa 3000 BCE, arrowheads from the Bronze and Iron Age (700 to 200 BCE), and others. There are also artifacts from Mongolia’s early empires; from the Turk empire were recovered plates, cups, pitchers, jewelry and other objects made from silver and gold, dating back to the 8th century CE circa 730. The remnants of the Uighur Empire include stone sculptures, arrowheads, runic inscriptions and miscellaneous objects from the 9th century. There is a model of the Xiongnu tomb, which was discovered in 1912, along with pottery, bronze objects and other relics excavated from that site. The second floor of the museum displays the costumes and jewelry of the Mongolian ethnic groups. The third floor is devoted to the empire that gave the country its name, none other than the great Mongol Empire. A mannequin of Genghis Khan is seated on his throne, and there are portraits of the first Mongol emperor and his descendants Ogedei Khan and Kublai Khan. There is a collection of Mongol armor and arrows from the 12th century, as well as various bronze and ceramic relics. There are also Buddhist artifacts on exhibit, most notably the Ganlin Horn, which was used by monks for exorcism rites, and is made out of human thighbones.

Mongolia’s first museum, the Mongolian National Museum, was founded in 1924, becoming the basis for the country’s later museums. The National Museum of Mongolian History would be established in 1991, following the merger of the archaeological, historical and ethnographical departments of the Museum of the Revolution and the State Central Museum. It is currently located in the former site of the Museum of the Revolution, which had been established in 1971.

The National Museum of Mongolian History has a photography charge of US$15.