The Pakistan Monument in Islamabad – Pakistan represents the 4 provinces and 3 territories of the country. It is a public monument constructed under the initiative of the Ministry of Culture.

Today, it serves as a major tourist attraction in Islamabad visited by thousands of tourists annually. 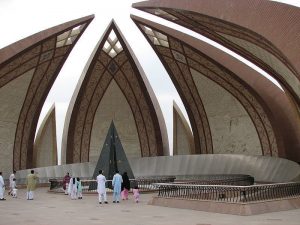 The Pakistan Monument in Islamabad – Pakistan is located along the western point of Shakar Parian Hills.

To get to the Pakistan Monument in Islamabad – Pakistan, your best option is to take a private taxi from the city centre of Islamabad and direct it towards the national monument.

While there are public taxis which are really buses, these can be quite uncomfortable especially under hot weather conditions.

The monument takes the shape of a blooming flower representing the country’s steady progression as a developing country in these parts of the globe.

From an aerial vantage point, the monument appears to have a star at the center as well as a crescent moon, depicting the symbols of the country’s national flag.

The interiors are adorned with various murals and the crescent that surrounds the star has inscriptions of quotes from Muhammad Ali Jinnah, the country’s founder; and poetry by Muhammad Igbal, renowned Muslim philosopher, political figure and poet.

Across the monument, you can also visit the Pakistan Monument Museum. The exhibits here are adorned with life-size and life-like statues depicting various scenes from the country’s rich and colorful history.

The Pakistan Monument in Islamabad – Pakistan project is the brainchild of the Ministry of Culture where a national contest to find the best design for the proposed national monument was held.

There were about twenty proposals for the design and out of these; one that was conceptualized and designed by Arif Masoud was picked.

The cornerstone was laid in the year 2004 on the 25th of May and the project was completed more than two years later, at the end of the year 2006. The complex was finally inaugurated the following year, on the 23rd of March.

The estimated cost for the entire project was pegged at around five hundred and eighty million Pakistani rupees.

Before you enter the premises of the Pakistan Monument Museum, you will be required to wear plastic covers – which are provided by the museum – to prevent dust and dirt from soiling the premises.

You will also be asked to turn off your mobile phones.