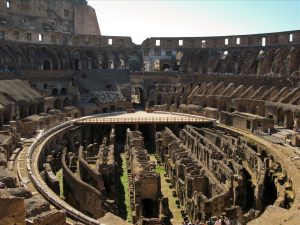 The Roman Coliseum in Rome – Italy is located in Piazza del Colosseo in Rome, Lazio, Italy. You can easily find it because it is situated at the heart of the city of Rome. It is near the Forums and some hundred yards away from Piazza Venezia. To get there, you can ride on a train and alight at the station near the Coliseum. Buses, electric minibuses, and taxis are also plying through the area so you can opt to ride on them instead of the trains.

This historic site is an amphitheater that is composed of four floors made mainly from travertine. There were a total of 80 entrances where two of these were reserved for the use of the emperor and his cortege. At the heart of the Coliseum is the arena that has the area of 79 meters by 45 meters. It is composed of sand and wood. Tall nets were installed around the arena that served as a protective wall for the safety of the spectators.

Located above this protective wall was the podium. This is where the emperor and his associates together with the other VIPs are seated. A cross is situated near the place of the imperial box. This cross was built in memory of the Christians who have been martyred at the Roman Coliseum in Rome – Italy.

Above the imperial box is the seating area called as the cavea. It is composed of three tiers where the knights are seated at the lowest tier. The wealthy citizens are seated at the middle tier. The general population is seated on the upper tier. Overall, this amphitheater can accommodate 60,000 seated spectators and 10,000 more who are standing. Subterranean chambers are located beneath the floor of the arena where the gladiators can rest before their performances.

The Flavian Amphitheater is the original name of the Roman Coliseum in Rome – Italy. Emperor Vespasian started the construction of this massive structure during 70 AD. Unfortunately, it was completed in 80 AD when he was already dead. The Coliseum was opened to the public during the time of Emperor Titus. It was believed that the inaugural celebration lasted for more than one hundred days.

The Coliseum was usually used for gladiatorial combats, animal hunts, mock sea battles, classical mythology dramas, and re-enactments of popular battles. The last staged hunt happened on 523 AD and the arena was never used again. It was neglected for centuries after that. The structure has experienced a number of fires caused by lightning and earthquakes in different eras. Repairs and restorations were made after each incident and what we can see now is what’s left of this magnificent structure.

Keep in mind that the ticket offices will close an hour before the closing time of the Coliseum. You must check on the schedules of the opening hours of the Roman Coliseum in Rome – Italy. It is usually closed on December 25 and January 1. Every Good Friday, a torchlight procession leading to the Coliseum called the “Way of the Cross” is done with the Pope at its head. 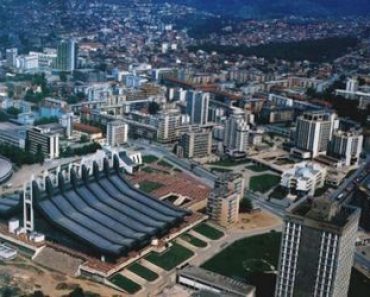