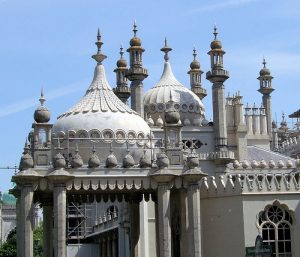 The Royal Pavilion in England – United Kingdom was once a seaside retreat for royalty with constructions spanning three campaigns that began in 1787. To get to the Royal Pavilion one must travel to Brighton, England. There are a variety of transport options that one can opt for. You may take the train, travel by car, coach, or bus, and finally you may also catch a flight for a quick trip.

Driving there will require land transport to take the M25 motorway. If one opts for a train ride then you can take any of the two trains leaving for Brighton at the London Victoria Station. If you opt for a trip via bus or coach then you have to travel via the National Express. Gatwick is the closest airport to Brighton, about half an hour drive away.

Upon approach to this magnificent structure, one can easily comment that it doesn’t look like a piece of English architecture. In fact, one can easily surmise its Indian roots and the Indo-Saracenic design. This is further confirmed when one steps inside and is welcomed by a rather oriental theme. The extravagant interiors are matched by an impressive array of foliage in the courtyard grounds.

Some of the interesting rooms you’ll find inside the Royal Pavilion in England – United Kingdom include the music room, banqueting room, the royal bedrooms, and the great kitchen. The music room was built for King George IV, due to his love for music. Members of the Italian opera performed here in concert with the king’s own musicians.

On the other hand, the banqueting room is regarded by many as the grandest section of the Royal Pavilion in England – United Kingdom. One can only witness the grand artwork in the hall including the large dragon chandelier. The huge banquet table is truly inviting for many guests and visitors.

Tours of the Royal Pavilion are on schedule on a daily basis. Visitors and tourists are required to pay an entry fee of 7.70 pounds, which also includes an audio tour. Both the guided and audio tour provides a dramatic effect to the portrayal of the history of this splendid edifice.

One of the designers of the Royal Pavilion in England – United Kingdom by the name of John Nash gave the building its rather grand Indian appearance. In fact, the design and style we see today are all products of his genius.