The Saviour Cathedral of Cherniv or Chernihiv is an important historical / religious church in Ukraine. It is the most ancient church in the country. 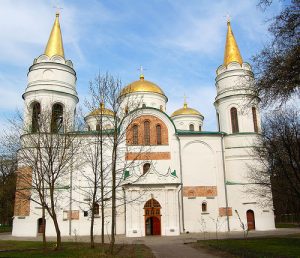 The cathedral is in Chernihiv, a historic city to the north of Ukraine.

The design of the church utilizes Byzantine architecture. Imposing in appearance on the outside, the interior is just as impressive. Within the cathedral visitors will come across marble made pillars. There are several artifacts in the cathedral, many of them dating as far back as 1030. The cathedral has five domes and is shaped like a cross. There are 3 apsis and 3 naves.

The Saviour Cathedral of Cherniv was built during the rule of Chernihiv Prince Mstislav. The cathedral has a view of the Desna River, which is another scenic attraction.

The first mention of the city was in the 907 Rus’-Byzantine Treaty. Excavations that have been done indicate the city probably existed at least in the ninth century. Different people ruled over the city during the tenth century. By this time, the city had grown in wealth and importance.

The 11th century saw it become the seat of the Grand Principality of Chernigov. This period saw them clashing with the Kievan Grand Princes. It would become the biggest municipality in Kievan Rus. It would include the Tmutarakan, Murom and Ryazan regions.

This was the golden age of the city. It had a population of over 30,000. Its golden age ended in 1239 when the city was destroyed by Batu Khan. In 1353, the area came under the rule of the Grand Duchy of Lithuania. Crimean khan Menli I Giray ransacked the city in 1482 and 1497.

The area was ruled by many different rulers from the 15th and 17th centuries. The middle of the 17th century saw the area grow in importance following the Khmelnytsky Uprising. Following the 1667 Treaty of Andrusovo, the area was ceded to the Tsardom of Russia. Under the Russian Empire, it became an ordinary city as the Hetmanate was abolished.

Ukraine travel tour packages have different price tags. Some tours include Ukraine and Russian tours. These will cost at 3000 USD.

There were paintings in the cathedral, but these disappeared sometime in the 18th century. However, new ones have been put in their place.

Aside from the Saviour Cathedral of Cherniv, there are other interesting sites in the city. These include the Eletsky Monastery caves. There are also many cathedrals and churches in the city.