The time of the Greek gods may long have passed, but their memory lives on through the temples that ancient man had built to honor them. The Temple of Poseidon is one of these magnificent structures that have stood throughout time on the land of myths and legends, Greece. 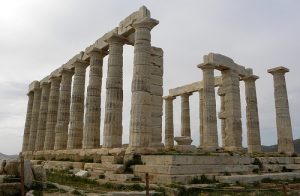 The Temple of Poseidon is located in Sounio (Cape Sounion), 45 miles (70 kilometers) southeast of Athens, the capital city of Greece. Usually among the first sites visited by Greek tours, travel to this place normally takes half a day, if traffic permits.

Constructed in the Doric style of architecture, the ruins of the Temple of Poseidon occupy a floor area of 13.47 x 31.12 meters. Of the 34 marble columns that originally comprised the temple, only 16 of them remain to this day. Nonetheless, they are an awe-inspiring sight, even in spite of their height of only 6.10 meters (20 feet). When the English poet Lord Byron visited the place in 1810, he carved his signature onto one of the columns. This act caused a precedent (some would say an unfortunate one), and now the columns are covered in numerous engravings left by visitors throughout the years. Meanwhile, the main temple itself overlooks the beautiful Aegean Sea, standing atop a rocky summit rising 60 meters (about 200 feet) above sea level; quite appropriate for a sanctuary built in tribute of the Greek god of the seas.

Since ancient times, Cape Sounion, also known as the Sanctuary of Sounion, had long been regarded as hallowed ground. It was originally mentioned in Homer’s Odyssey as the site where Menelaus buried his helmsman Phrontes Onetorides while en route from Troy. The Temple of Poseidon, one of 2 places of worship situated on Sounio (the other one devoted to the goddess Athena), begun construction at roughly 500 BC, but that initial attempt remained unfinished. Pericles constructed the temple that currently stands at the cape between 444 and 440 BC over the ruins of the original temple.

The full admission price at the Temple of Poseidon is 4 Euros. The reduced admission price for citizens of the European Union (EU) over the age of 65, as well as for students from outside of the EU, is 2 Euros.

The Temple of Poseidon offers free admission for visitors under the age of 19, journalists, tour guides, university students from Greece and the EU, soldiers serving out their military service, members of the ICOM-ICOMOS, and people carrying free admissions cards. Otherwise, the temple’s free admission days include the 1st Sunday of each month except July, August and September (the 2nd Sunday is the free admission day in those months), Sundays between November 1 and March 31, International Environment Day (June 5), International Monuments Day (April 18), International Museums Day (May 18), and various national holidays. The temple’s normal opening hours is from 9:30 AM to 5:00 PM. They can be contacted by phone at 22920 39363. For more information on the Temple of Poseidon, log on to http://odysseus.culture.gr.