When China’s first emperor died, an army of clay soldiers was placed to guard his tomb. Thousand of years later, the Terracotta Warriors live on, and have since been among China’s most famous tourist attractions. 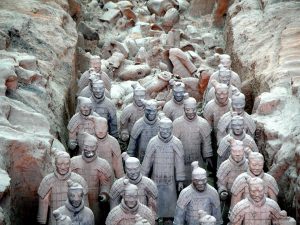 The Museum of Qin Terracotta Warriors and Horses is located in Lintong District, Xi’an in the province of Shaanxi, and situated 1.5 km east from the Qin Shi Huang Mausoleum. If coming from Xi’an Xi’anyang International Airport, take the Airport Shuttle Line 2 bound for Xi’an Railway Station. From the railway station, take any of the following tourist buses, no. 5, nos. 5 (306), 914 or 915, and then get off at the last station. If coming from downtown Xi’an, one can take either tourist bus no. 5 (306) from the Xi’an Railway Station’s east square or bus 307 from Tang Paradise’s south gate, then get off at the Bing Ma Yong station. The travel time takes around 1 hour. If coming from Lintong District, take either buses 914, 915 or the Special Line 101, then get off at the Terracotta Museum. The travel time takes around 15 minutes. One may also hire a taxi going to the museum. There are also 30 shuttle buses that travel between the Terracotta Museum and the Mausoleum, which can be availed for free by presenting the entrance ticket.

Covering a 16,300 sq m area, the Museum of Qin Terracotta Warriors and Horses is divided into 3 main sections or pits. Pit 1 contains 6,000 Terracotta soldiers and horses, poised as though ready to charge into battle. Aside from the statues, various ancient weapons were also discovered in the pit, such as arrows, crossbows, swords and spears. Pit 2 holds around 1,300 soldiers and horses, and more than 80 war chariots, as well as a collection of bronze weapons numbering in thousands. Compared to Pit 1, the warriors in Pit 2 are arranged in much more complex battle formations. Pit 3 appears to represent the army’s headquarters, containing 68 soldiers, 4 horses and 1 chariot. What’s peculiar, though, is that many of the warriors in this pit are headless, which is attributed to vandals who had once broken into the site.

The Terracotta Warriors were commissioned by China’s first emperor Ying Zheng, who ascended to the throne at only 12 and a half years of age and renamed himself as Qin Shi Huang (literally “First Emperor of Qin”). Among Qin Shi Huang’s accomplishments was the construction of the prototype to the Great Wall of China. In 246 BC, the emperor, then aged 13, undertook the construction of his mausoleum, which would take 700,000 laborers working for 11 years to complete. As part of the mausoleum, Qin Shi Huang ordered the creation of an army of clay sculptures, consisting of more than 8,000 soldiers, 150 cavalry horses, and 130 chariots drawn by 520 horses (with even more sculptures yet to be exhumed from the pits). So meticulous was their creation that no 2 Terracotta Warriors were to look alike. The Terracotta Warriors were discovered in Lintong District, Xi’an, Shaanxi in March 1974, with the first pit uncovered by a group of farmers while they were digging a well. The Mausoleum of Qin Shi Huang was declared a UNESCO World Heritage Site in 1987.

The entrance fee into the Museum of Qin Terracotta Warriors and Horses is CNY110 (Chinese Yuan).