The Thingvellir National Park is a UNESCO World Heritage Site. It is one of Iceland’s best known parks thanks to its majestic landscape. 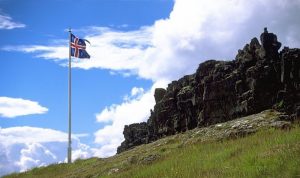 The park is situated in southwest Iceland. It is a 60 minute drive from the capital Reykjavik. If coming from the capital, take route 1 by way of Mosfellsbaer. You can then go to route 36 that goes through Pingvellir. You can also take the bus at the terminal in the capital. Most of the buses appear during the summer.

The biggest attraction at the Thingvellir National Park is the old parliament site. Only signposts remain, but it is enough for someone to get an idea of what the site was like. The park also has many old farms at the lava field in the fault valley.

This is a good place to hike. At the Visitor Center you can check out the Hakio view spot. The footpath will take you to the Almannagja fault. The Center also has an interactive multimedia exhibition.

There are two camping areas in the park: at Vatnskot in Lake Pingvallavatn and Leirar close to the info center. Leirar has four camping grounds.

The history of the site begins with the establishment of parliament in the area. This was in 930 AD. It was the seat of parliament until 1798. The period between 870-930 is known as the Age of Settlements. This was when people began settling in the area. Most of them came from Scotland, Ireland and Norway.

Although the place gradually lost its role, the people still go there regularly to socialize. The area would also become the meeting place during major social events. In 1930 the area was declared a national park. It would go on to become one of the top tourist attractions in the country.

There is no entry fee needed to enter the park. A small fee has to be paid if you want to go fishing.

Around the old parliament is an old church. You can visit it during the summer. A mass is held there every Sunday at 2:00 pm. You can drop by if you like. There are a couple of submerged rifts in the park you can dive in. They are Daviosgja and Silfra.

Before you go diving at the Thingvellir National Park, make sure you understand all the rules and regulations. For example, you cannot dive deeper than 30 meters and diving alone is prohibited.