Lake Titicaca in Puno is without doubt one of the most spectacular sites you can visit in Peru. At 3,811 m (12,500 ft), it is the highest navigable lake on the planet. 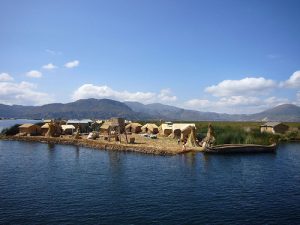 The lake can be found at the border of southern Peru and northern Bolivia. The western section of the lake is inside the Puno region of Peru. The eastern portion is at the La Paz Department of Bolivia.

The main attraction here is obviously the lake. At this altitude, one can get overwhelmed by the views from high above. Aside from the sheer beauty of the waters, there are islands around the lake.

Uros are a group of 42 islands and are very popular tourist destinations. Amantaní is an island with half a dozen villages. Some tourists visit the place even though there are no hotels here.

Other islands are the hilly Taquile and Isla del Sol. Taquile is particularly noteworthy as its culture is over a thousand years old and never been affected by modern civilization.

The origin of the name is unclear. The word is said to mean Rock Puma. According to some locals, the name was chosen because the lakes shape is akin to a puma. However, the name can also mean Crag of Lead.

Through the centuries, several civilizations would appear. The earliest appeared in the 9th century. It was not until the 15th century that the Incas emerged and took over the place. The Reserve was established in 1978 to preserve the area.

Going to see the lake is free. But if you want to visit the other tourist areas around it, you can try any of the tour operators available in Peru and on the Web. These tours usually cost at least 20 USD per individual.

The lake is home to considerable water bird populations. It is also worth noting that some species like the flightless Titicaca Grebe and Titicaca Water Frog are rarely found outside this environment.

Lake Titicaca in Puno is also the ancestral home of the Puquinas, Pacajes, Aymaras and other natives who inhabit the aforementioned islands. The area also served as the foundation of the pre-Hispanic cultures in the area.