Timbuktu in Mali is a fascinating city with several interesting landmarks and sightseeing spots. Fortunately, there are now many ways to get to the city. It is also known as Timbuctu a0nd Tombouctou.

Tombouctou is in the country of Mali. It is along the Niger River. You can drive by car via Mopti (12 to 24 hours). If you have a 4×4, you can go via the desert.

Visitors can also enter the country via pinasses at Mopti. The boat ride will take three days, but it can be quite enjoyable. Another option is flying at Timbuktu Airport. However, flight schedules are not always reliable.

The mosques are among the major attractions in Timbuktu in Mali. There are three large ones in the city. The most impressive is the Djingareiber Mosque. The Sankore is also worth a look, especially its minaret. 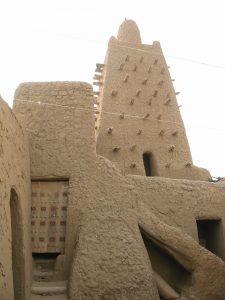 These two mosques are walking distance of one another. The homes of the early western explorers are still intact. The Heinrich Barth house is particularly noteworthy for its antique photos and museum.

The town was very important during ancient times. For much of its history, it served as a trade station joining Africa to the Islamic and Berber traders. The place used to be difficult to access which made it even more enticing to travelers.

These days, it is an impoverished town. But it remains very popular with tourists owing to its history. The building of an airport has helped its tourism industry, on which it relies upon heavily.

This will depend on how comprehensive the trip is. If traveling independently, you’ll have to pay for the tickets and the lodging. This can be cheaper, but you will have no guides. A tour operator will take care of the food, transport etc. But it will cost about $2,000 to $3,000.

The national museum is filled with relics and artifacts explaining the origin of the country. There is also a sizeable collection of folk art. The Grand Marche is a market. People go there to buy all sorts of stuff. But even if you are not buying, it’s worth a visit just for the view at the top.

Visitors to Timbuktu in Mali can also avail of sunset tours while riding camels. The view from the desert while watching the sun go down is spectacular.