A trip to Torun Poland is one of the best ways to experience and relive the medieval age. Untouched by the ravages of war, it is one of the country’s most cherished historical sites.

This medieval city is located by the Vistula River in the northwestern portion of the country. There are several bus services that will take you to the place.

If you want to drive there, take Highway A1 between Gdnask and Torun. The Polish State Railways can take you there if you are coming from Olsztyn, Katowice, Poznan and Warsaw. The medieval city’s own railway station is along the Vistula River.

The statue of a violinist can be found at the Old Quarter. Dating back to the medieval age, it is a UNESECO World heritage site. The Nicolaus Copernicus Museum is also there. The famous astronomer was born in the city in 1473. A trip to Torun Poland will also bring you to the Dybowski Castle ruins. You will also come face to face with the Ratusz Staromiejski town hall and the Baj Pomorski Theatre. 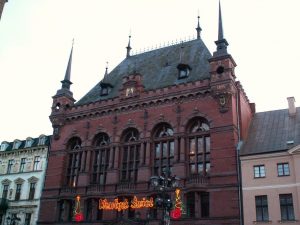 Records show that the site was already inhabited during the Neolithic and Mesolithic periods. It also served as a place of relaxation for people wandering along the Vistula River. During 1300 B.C, the Lusatian people settled there.

Around the Middle Ages, various settlements appeared in the site. The area was given various titles such as “the inland port of the Polish Baltic areas” and the “the queen of the Vistula”. In 1236, the settlement was relocated within the present Old Town boundaries.

City walk tours are priced according to the length of the tour and the number of people with you. A single person, 3 hour tour will cost around 89 Euros. The cost is usually lower if there are more people in the group.

Besides the Old Town, you may also want to check out the Gingerbread Museum at Rabianska street. The New Town market is filled with souvenir shops, food, drinks and shops. During the summer, you can also relax at one of the many street cafes around the old town. Many of them are at the River Vistula bank.

When on a trip to Torun Poland, you may also want to visit the Teutonic Knights Castle ruins. While almost totally destroyed, you can still ascend to the top of the one remaining tower.