Although troubled in some times, Syria is still an historic country that people craving a sense of history in their travels must visit for the fascinating place to visit. Here are the top ten things you shouldn’t miss when visiting Syria. 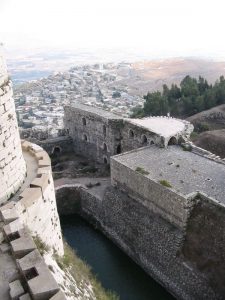 Also called as ‘Castle of the Knights’ and ‘Crac des Chevaliers’, the castle is widely distinguished as an archetypal crusader castle. This tourist spot in Syria is situated near Homs and is considered as the world’s most well-preserved and very admirable castle. The castle site is somewhat isolated since it is 750 meters above sea level.

This major tourist spot in Syria is composed of the impressive Roman city ruins that are situated in the center of the desert. Tour around the city of ruins and become mesmerized of the astounding Temple of Bel, the funerary towers, the colonnade, the Arab castle, and the hypogeum of three brothers.

A set of ruins situated on the northern part of Hama in Syria. Due to the high elevation of this tourist spot in Syria, the place is always foggy and gives visitors the unique hazy feeling as you roam around the ruins. The mile-long Roman style colonnade is an interesting place to do the vanishing point in photography.

The so-called Dead Cities are a scattered collection of villages in Northern Syria that are alive during the Early Christian and Roman era. These tourist spots in Syria are one part of the ancient city of Antioch. The Dead Cities are already abandoned for centuries and visiting these places is really interesting.

An important archaeological site of the country and has been pronounced as a UNESCO World Heritage Site. This tourist spot in Syria is an ancient city that contains various ruins from the time of the Romans, Byzantines, and Muslims. The well-preserved Roman theatre is the main attraction of the place.

Considered as a quiet gem within a valley of pine trees and is located about 37 kilometers away from Lattakia. The most notable feature of this tourist spot in Syria is its ditch with a depth of 28 meters that was cut through a living rock. The thickness of the walls is five meters and the covered area of the walls is about 24 square meters.

The capital city and the largest city of Syria that was established about 10,000 B.C. to 8,000 B.C. Known as the world’s oldest inhabited city, you will always have that ancient feel as you tour around this magnificent tourist spot in Syria. An ideal activity in the city is to behold the astounding panoramic view of Damascus from the peak of Mount Qasioun.

A Syrian city that dates back to the times of the Ancient Greek and still serves as a major commercial port of the country today. The region within this tourist spot in Syria has widely diversed landscapes ranging from sandy beaches to green mountains. Significant archaeological sites are close nearby for a day’s visit.

A somewhat conservative Syrian city and is also the second largest city of the country. This tourist spot in Syria is historic, beautiful, and worth visiting with ancient citadels that provide great scenic views and a large souk at the heart of the city. Walking around the city a few times will let you feel how lively and vibrant the place is.

There are wonderful sites to visit within the city that includes the Alnoori Grand Masjed, Khaled ibnul Waleed Masjed, and Ommel Zinnar Church. Hike up to the mountains surrounding the city where you can enjoy beautiful scenic view, cool climate, and camping.