Trips to Troy in Turkey can be an enthralling experience. A UNESCO World Heritage Site, it is the place where legend and history come as one. The city is also known as Troia, Troya, and Truva. 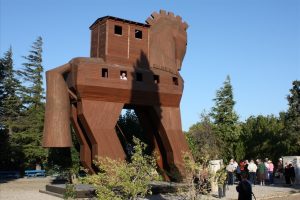 The ancient city can be found in northwestern Turkey. The closest center is Canakkale, about 30 km from the ancient city. You can ride one of the minibuses that depart from Canakkale every hour.

You can also reach the place by car. The site is a couple of kilometers from Canakkale-Izmir highway. There will be signposts indicating where the city is.

The city was destroyed and rebuilt nine times, so nine layers of cities can be found all over the place. The best known of these is Troy VII. According to researchers, this is the city that Homer used as inspiration for his story. Some of the walls are still in good shape.

No trips to Troy in Turkey would be complete without ascending the Trojan Horse ladders. These ladders were added much later in the site. However, they form an integral part of your visit. The ladders are at the entrance.

The city is best known as the setting of Homers Iliad. The city was originally thought to be entirely fictional. But in 1822, the Scottish journalist Charles Maclaren studied the legend closely.

He came to the conclusion that the real city was at north-western Anatolia. In the year 1866, the American Frank Calvert stated the New Ilium hill known as Hisarlik was the site of Troy.

In 1868, Heinrich Schliemann obtained permission to conduct diggings in the area. The excavations took place beginning 1871–73. His excavations would unearth several ancient cities. These complexes date from the Bronze Age up to Roman times. Schliemann and other archaeologists after him would uncover many other cities.

The entrance fee to the site is 15 TL pp.

You can climb the ladders anytime you like, but weekdays are more ideal than weekends due to the large number of schoolchildren there. During weekends, even the horse interior is crammed. Make certain you are wearing walking shoes. The terrain can be rough at some points or even slippery.

The best time for trips to Troy in Turkey is the winter. Prices are lower. Even better is the fact that few tourists go there. You will be able to explore the place at your own leisurely pace.