Vincent Van Gogh was a Post-Impressionist artist who was virtually un-appreciated and un-acknowledged in his artistic field when he was alive. His works however gained him the fame that he should’ve enjoyed when he was alive, years after his death.

Today, he is considered as one of the greatest painters of all time and his paintings fetch thousands of dollars per piece. The Van Gogh Museum in Amsterdam – Netherlands displays some of his works. 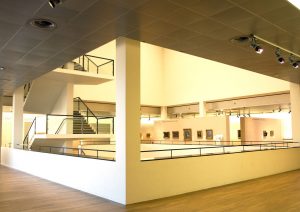 The Van Gogh Museum in Amsterdam – Netherlands is situated within the southern district of Amsterdam, in the locale of the Museum Quarter. It is located at Paulus Potterstraat 7.

The Van Gogh Museum in Amsterdam – Netherlands is said to have the largest collection of the works of the famed Dutch painter.

Permanent exhibits at the museum are the artist’s various paintings, sketches and drawings. These include landscapes, self-portraits, portraits, peasant life, and still life.

Landscape paintings include “The Hill at Montmarte with Stone Quarry” done in 1886, “Garden with Courting Couples: Square Saint-Pierre” done in 1887, and “Field with Flowers near Arles” done in 1888.

His Still Life paintings include the highly famous “Sunflowers” done in 1889 and his Peasant Life collection has the famous “The Potato Eaters” done in 1885.

Apart from the works of Van Gogh, works by his contemporaries are also on display at the museum: Gauguin, Manet, Monet, Bernard, Breton and a few other artists.

After the death of Vincent Van Gogh in the year 1890, his brother Theo Van Gogh acquired his works. Theo however died only 6 months after Vincent thus leaving the artist’s works to Theo’s widow, Johanna.

Johanna sold most of the artist’s paintings with the intention of spreading his works and sharing these to as many people as possible. She however kept a private collection.

The collection was passed on to Johanna’s son when she passed away and the collection was later loaned to a museum in Amsterdam before it was given to the Vincent Van Gogh Foundation some time in the year 1962.

Work on the Van Gogh Museum in Amsterdam – Netherlands started in 1963 and was only completely finished ten years later, in the year 1973.

The cost to visit the Van Gogh Museum in Amsterdam – Netherlands is 14 Euros per person. Guests from 0 up to 17 years of age get free admission. An audio guide is available for 5 Euros.

For kids, there is also a special audio guide and this costs 2.50 Euros.