Valparaiso – Chile is the capital city of the Province of Valparaiso and is an important port of the country.

A good number of “firsts” was established here including the country’s first public library and the continent’s volunteer fire division. 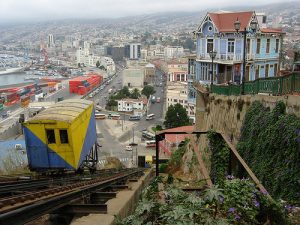 Valparaiso – Chile is located in the central part of the country, about one hundred and twenty kilometers off the northwestern section of the country’s capital city of Santiago.

Flying in to Valparaiso – Chile is via the international airport located in Santiago, the Arturo Merino Benitez International Airport. This is the nearest airport to city and is well-served by several international flights year-round.

From the airport, you can catch a bus going to Pajaritos. From the terminal in Pajaritos, you need to cross southwards going to the bus depot where buses to Valparaiso can be found.

If you will be coming from other parts of the country, there are also train and bus services that have regular runs going to Valparaiso.

For first time travelers visiting Valparaiso – Chile, a recommended activity is going up one of the “ascensores,” funiculars situated at specific hillsides in the city.

A ride up will give you good views of the city.

There is also a popular tourist sight in the city which is one of the homes of famed writer Pablo Neruda. This is known as La Sebastiana. Here, you can also learn more about the poet; his life, works and little curiosities about him.

You can also check out La Matriz Church; Ex Carcel which was once a prison but is now a cultural venue; and the Museo Naval y Maritimo or the Naval and Maritime Museum.

There are also a number of bars and pubs, restaurants and cafes spread out across the city.

Designated as a UNESCO World Heritage Site in the year 2003, Valparaiso – Chile served as a major port for ships sailing between the Atlantic Ocean and Pacific Ocean during the latter parts of the nineteenth century.

It is believed that the first inhabitants of the city were Picunches Indians while others believe it was the Changos Indians who first settled here.

It was however the Spanish explorers who traveled into the city in the year 1536 that are considered as the first discoverers of the country of Chile.

Juan de Saavedra, a conquistador from Spain, named the city Valparaiso after his own native town in Cuenca, Spain known as Valparaiso de Arriba.

Rides up the ascensores are about Chilean Peso 300 each.

Tourists are warned against pickpockets especially around the port area. While Valparaiso – Chile is a relatively safe city, there are a few unscrupulous characters that may take advantage of you especially if they find out that you are a tourist in the area.