The Visoki Decani monastery is one of the most important Orthodox Christian monasteries in Serbia. The monastic katholikon is one of the biggest medieval churches at the Balkan region. 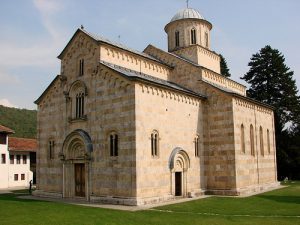 The frescoes preserved here are very extensive, and rank among the finest in Europe. The church was constructed using onyx marble and also some light-yellow and red-purple marbles. The church is most notable for its immense dimensions. Architecturally, the Visoki Decani monastery style is a combination of Early Gothic and Romanesque.

The interior of the church has the original 14th century stone templon. The sarcophagus of King Stefan is also there. One of the most notable frescoes is Christ Carrying the Cross. Another one is the Marriage at Cana. The Relic of the True Cross is another major attraction at the site.

The monastery was founded in 1327 by Serbian King Stefan Uros III Decanski. After the king died, he was interred at the monastic church. This would increase the popularity of the place and turn it into a shrine.

After the king died, work on the monastery was continued by Emperor Stefan Uros IV Dusan, his son. It was not until 1350 when the wall painting was finished. The church would go on to be dedicated to Christ Pantocrator.

The structure was built under the direction of Vitus of Kotor, a Franciscan monk. In 1990, the church was declared a Monument of Culture of Exceptional Importance due to its record of 14th century times.

Cost of tours to Serbia varies greatly. At the most basic, you can go there on your own and just pay for the airfare which should be around 1000 USD or so. Guided tours will cost at least a few hundred Euros. A more extensive tour (i.e., a week) will cost at least a thousand Euros.

The Crucifixion fresco is noted for two unusual objects. These objects are said to symbolize comets. However, some UFO researchers believe they are actually spaceships.

They point out that the objects cannot be comets because there are people inside it. They also say the objects look like UFOs. For this reason, it is one of the most popular attractions in the site.

The Visoki Decani monastery remains one of the most popular tourist destinations in Serbia today. In 2004, it was included in the UNESCO World Heritage List.