The tourist attractions in Vysocina have turned the region into one of the main travel destinations in the Czech Republic. Made up of several cities and towns, there will be plenty for you to explore here. The area is also known as the Czech-Moravian Highlands.

The area is known as an administrative unit in the country. The region is situated in the southeastern portion of Bohemia. Part of it is also in Moravia’s historical southwest region. Jihlava is the capital. 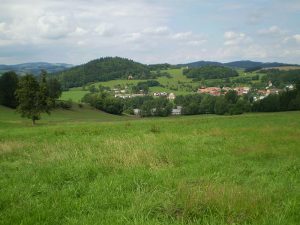 The place is known as the green heart of the Czech Republic thanks to its cleanliness and lush scenery. Some of the most interesting towns and cities are Jihlava, Telc, Pelhrimov and Nove Mesto na Morave. Jihlava is 60 km northwest of Brno / Brunn and near the Prague highway.

The town square and the old tower are the highlights here. Other tourist attractions in Vysocina include the town square of Telc and its Baroque buildings. There is also a monastery and lake in the town. There are also several nice buildings in the site.

Some of the earliest settlers in the region were the Slavic tribes from Vistula in the 5th century. The Czechs would go on to establish the Bohemian kingdom. The kingdom would reign over the land from the 10th to the 16th century. The Hapsburg Empire would rule the area beginning in 1526.

They would remain under the rule of the Hapsburgs until the end of World War I. The Austrian-Hungarian Empire collapsed after the end of the war. On November 14, 1918, Slovakia and the Czech lands merged. The end of 1991 saw the emergence of the Slovak nationalist movement. On January 1, 1993, Czechoslovakia was dissolved and the two became independent republics.

Tours of the country can be generally divided between budget, first class and luxury / deluxe. The budget tours cost around 50 to 200 USD per person per day. A first class tour will cost 80 to 350. If you want the luxury tours, it will cost anywhere from 200 to 650 USD.

Other places you can visit in the region are Zdar nad Sazavou, Velke Mezirici, Pacov and Nove Mesto na Morave. There you will come across the “U zlateho lva” house and the Church of All Saints.

Other tourist attractions in Vysocina include the Horni Cerekev Jewish Cemetery, Chotebor and Humpolec. Each of the towns and cities in the area have their own unique features.