The Wolfgangsee Lake in Salzburg is one of the most distinguished lakes in Austria. The areas around the site are also very popular among tourists. 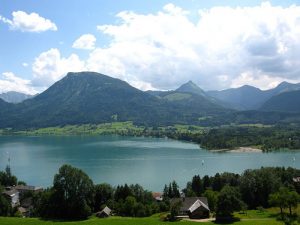 Majority of the lake is situated in Salzburg state. There are several municipalities along its shore including St. Wolfgang and St. Gilgen and Strobl.

The whole area is considered a resort. Some of the most popular attractions in the area are the villages of Ried and Abersee. Visitors also visit St. Wolfgang, a market town. At the opposite of St. Wolfgang is die Enge, the peninsula that divides the lake into two areas. The western section is called Abersee.

Another one of the tourist attractions at Wolfgangsee Lake in Salzburg is the Salzkammergut mountain range. To the south of St. Gilgen is Zwolferhorn (1,521 m). You can reach the place by way of cable car.

During the summer, St. Gilgen and St. Wolfgang are filled with tourists. St. Wolfgang is particularly well known for the Gasthaus Weibes Rossl. This was the setting for the White Horse Inn operetta by Benatzky.

This glacial lake has a surface elevation of 538 m (1765 ft). The water volume is 667.07 mio m2 and the surface area is around 13 km2. The lake and the town got their name from Saint Wolfgang of Regensburg. Legends state he founded the church at the beginning of the tenth century.

From the northwest to the southeast the lake extends some 10.5 km. Schafberg is at the north end. The Schafbergbahn is a rack railway that goes up to the peak at 1,782 m. A footpath links the Ried village to St. Wolfgang. Osterhorngruppe, with heights of 1,800 m is at the southwest.

There is no fee required to visit the lake. The city buses in Salzburg cost 2. 24 Euros for a single trip. A ticket good for a week costs about 12 Euros.

There are other tourist attractions in Salzburg. These include the Schloss Hellbrunn summer residence, the Hohensalzburg Fortress and the Alter Markt Square. You should also not miss the Salzburg Festival. Since its inauguration in 1920, the festival has become known worldwide for is concerts. Other landmarks are the Residenzgalerie, Salzburg Cathedral, St Peter’s Church and many others.

Wolfgangsee Lake in Salzburg is also known for being the setting of numerous Heimatfilm films. The site was also frequented by the former German chancellor Helmut Kohl.