The tourist attractions at Yangon (the former Rangoon) are many and varied. While no longer the capital of Myanmar, it remains very much the economic center of the country. 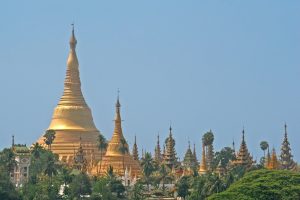 The Yangon International Airport is the main airport in the city. There are direct flights to it from airlines like Air India, Vietnam Airlines, Malaysia Airlines and Thai Airways. Once you land, you can get around the city via taxi.

When you are at the Shwedagon, make sure to check out the pagoda platform, the Mailamu Paya and the Saint Marys Cathedral. The walkways and the day shrines are also worth visiting. You will also want to visit the Statue of Wa Thon Da Ray, Arakanese Prayer Pavilion and the Maha Ganda Bell. Other religious sites worth checking out are the Musmeah Yeshua Synagogue, the Holy Trinity Cathedral and the Sule Paya.

Parks also make up some of the best tourist attractions at Yangon. Some of the finest parks are the Zoological Gardens, Peoples Park, the Mahabandoola Garden and the Inya Lake, the biggest in the city.

Historical records show that a village named Dagon had been in the area since the 6th century AD. In 1755 this was changed to Yangon. The end of the Second Burmese War in 1852 saw the city become the capital of Burma. The British called it Rangoon. In 1962, the military took over the country.

In 1989, the city named was reverted to Yangon. It was in 2006 when it was removed of its capital status and given to Naypyidaw. In spite of this, Yangon remains its commercial center and the site of some protests against the government.

There are many other places you can visit. These include the Bahadur Shah Zafar grave, one of the greatest Mughai emperors. There is also the Defence Services Museum and the Martyrs Mausoleum. The Strand Hotel is the oldest in the country and you can find it at Strand Road.

Aung San Suu Kyi’s house has inevitably become one of the biggest tourist attractions at Yangon. While the place is barricaded, there is no conspicuous military presence.