The tourist attractions at Zaanse Schans is one of the reasons why people visit Zaandam often. Part museum and part open air conservation area, it has several features that will satisfy visitors. 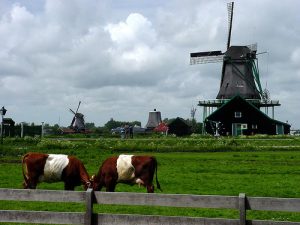 This conservation area is located at the River Zaan banks at Zaandam. It is at the north of Zaandam. You can reach the site by way of the Koog-Zaandijk railway station. When you get off, just follow the signs to reach the site. If you are in Amsterdam, you can take the Connexxion bus line 91. This is at the central station. You can even go there by boat.

Aside from the open air museum, you can also visit the cheese farm and see how cheese is made. The cheese farm consists of a large room with several equipment. There are several goats in the backyard.

One of the most popular tourist attractions at Zaanse Schans is the clog museum. This is a repository of different types of clogs. You will also see how the clogs are made.

Visitors to the site can also drop by the In den Gecroonde Duyvekater bakery. The store sells plenty of sweets, candies and bread. No visit to the place will be complete without checking out the windmills.

Zaandam used to be known as Saenredam. During the Dutch Golden Age, the town functioned as a milling center. During this period, the windmills were used to power saws for the shaping of wood. They were used for the paper industry and for building ships.

On June 20, 2004, a statue was built to honor this period in their history. It is called De Houtwerker (the Woodworker). During the first Industrial Revolution, Zaandam was one of the leading towns. It is known that Peter I of Russia went there in 1697. The place where he stayed has been preserved. It is known as the Czar Peter House.

There is no entrance fee for visiting the open air museum. The windmills require a small fee. There are no entrance fees for the cheese farm and the clog museum.

You can also visit the Albert Heijn store. It is the most famous grocery chain in the country and you will be able to see artifacts, boxes and their other products.